Solid race, if you took a look at the results, 1 1/2 minutes was the difference between 13th (4:29:38) and 8th (4:28:04). I didn't use a watch at all for the race, my Garmin lost its charge overnight and my non-GPS running watch battery died last week. I had no idea about time while I was out on the course. That led me to be off regarding my fueling plan; I took too long to take my gels and not enough lytes. I was stuck holding two GU's at the end of the race that I should have used.

I ran out of gas the last two miles. I was well trained and had a good plan, I just didn't fuel properly and I had nothing left in the tank for the short steep up hills at the end. I was pretty much 14th the entire race, up to 13th about mile 20; then as high as 11th in final 4 miles. I gave back two spots in the final half mile - I hate getting passed that late in the race.

Overall a solid race, just a bad taste in my mouth regarding my watch issue, missing out on my fuel plan, and getting passed in last half mile. I'm thrilled to get a 4:30 on this tough of a course.

Although there were cool temps and a forecast of 30 mph winds, the winds were really not a factor as the course was shielded from the wind throughout the race. There were a couple of sections where it was "open" and wind was a cross wind vs. a head wind - it just made it chilly at those spots.
The first big decision of the day was about the shoes. Which shoes do you wear for a race on a trail - trail shoes or road shoes?
I went with the trail shoes..... 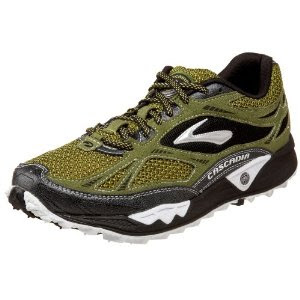 My Garmin mysteriously lost its charge overnight and my regular non- GPS running watch battery died the week before. I ran the race without a clock attached to me.

Here is a picture of the start line - sorry for the blurry pic - best I could find! I am just to the left of the guy in the bright yellow shirt on the left 1/3 of the picture - I am wearing the navy running baseball style hat!) 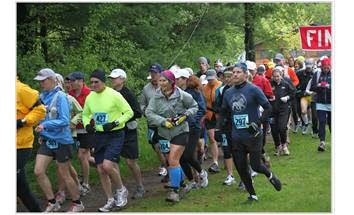 I figured a good start would be under 2 hours for the out and back 13 mile section. Started hard and ran a solid. I found a "pacer" and decided to stick with him for a while. After the turnaround, I saw John on the way back in - he mentioned something about 59 minutes - I was about 7 miles into the 13 mile out and back - okay, I think I was on target....
(From the picture below, you can see the out and back section followed by the loop which we did - twice!) 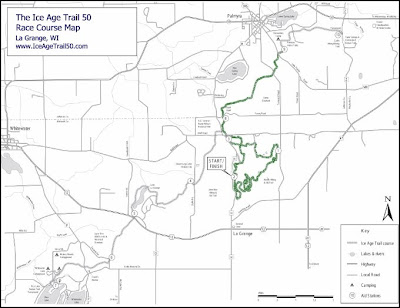 The 13 mile out and back section leads us back to the start line - I was expecting my first glimpse of a clock. There was none to be found. I thought I was running a little fast, but I felt good, so I kept pace. About a half mile into the Nordic loop - I settled into a pace next to someone who was running the second leg of the 50k relay. He let me know the official time was 1 hr and 54 minutes. WOW - I was way ahead of where I thought I would be and realized I had a good shot of running a 4:30 trail 50k.
The loop was pretty uneventful, but I noticed a few steep up hills. I realized these would not be fun on the second lap. Also, I forgot where the aid stations were, I thought the aid station was about 4 miles into the loop - it was six. I thought I was never going to get there!! I finally saw a sign that said the next aid station was a short 97 trees away... (It was short; imagine counting trees in a dense forest...)
After the first loop, I saw the clock for the first time. 3:05:??... Wow, I just had to run 9 miles in hour and 25 minutes to get under 4:30?? I could do that!!
I ran next to a guy who said this was his first 50k. I mentioned he was doing a great job, keep it up, although it can and will likely get harder, it will end. He mentioned to me that he knew, he ran on the trail before – a 50 mile run and a 100 mile run (different races). Nice Sturm-Smith (duh!) – (I should have learned my lesson a few years ago when a guy asked me during a 10k what my 10k PR was. I said I didn’t have one – I never ran a 10k before. Oh yeah – I went to Boston earlier that year and had done about 8 marathons at that point – just never ran anything shorter than a 20k. Just as an FYI – I came in 3rd at that 10k race and the guy who asked me the question came in 4th.)
It was a struggle the last two miles, I walked quite a bit of the up hills - I just ran out of gas.... Without my watch, my fuel plan went out the window and I was stuck holding a couple extra GUs that I should have taken on the race. I passed a few people on the first and second loop only to give back two spots in the final mile. 13th overall and with a time of 4:29:38.
Running a sub 4:30 on that was a great accomplishment for me!
I headed back to car to change and get warmer. While I was changing in the car, it started to rain - HARD. Then it started to HAIL (pebble sized, but still hail!!). My thought was 1) that sucks that John is still out there; 2) I'm sure glad I'm done!
Nutrition Plan Review 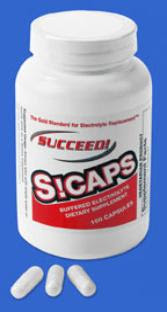 Oops, I'll have to come up with something else at the aid stations...Pretzels??
I was running with a guy and I asked him how long we had been on the course. He said 38 minutes; I waited for the next incline and took my first GU.

For the water/heed mix - There was an aid station I planned to hit just before an hour. My plan was to start with a full bottle of HEED. I carried a pill bottle with 1 scoop of HEED in it and planned to mix up another batch at the first aid station.

MISTAKE #2 - Turned around without actually stopping.

I drank almost all of my HEED mix at that point, but did not refuel. After I turned around and ran about a half mile - I thought - "THAT was stupid, you needed to reload!!" I missed out not only on my 20 oz HEED refill, but also the 4-6 oz of additional HEED I would have been able to get from the aid station.

I lost track of time, took my second GU around hour 2. Not too bad, but I was behind from what I though I might need. I stopped at the drop
area/cooler and picked up new handheld bottle of HEED and ate 1/2 cliff bar.

Stopped at the AID station about mile 19 (2 hrs 40 minutes into the race??) Grabbed some HEED off the table and had them top off my hand held with water. It was only about half empty. Grabbed 4-5 pretzels (is that a substitute for S caps??) and a quarter of a PB and jelly sandwich because it looked good.

MISTAKE #5. Ran by the drop area without stopping with 9 miles to go. The plan was to stop, dump my water/heed mix and fill up with a bottle I had mixed prior to the race. I didn't stop - I only had 9 miles to go!(Funny how the mind works!!)

I did grab some more pretzels, I felt much better after having those from the last aid station. I also grabbed a cup of heed, and had my water filled once again with water only.

Drank the rest of water/heed mix, - took third Gel about 3 hrs and 10 minutes. That was my last GU that I took, but I still had one in my Race Ready shorts and one at the drop bag that I was suppose to pick up at the drop bag...

With 4 miles left in the race, I grabbed a few more pretzels and decided to just run hard and be done.

I ran out of gas with 2 miles to go. I made it through 1 mile okay, but the last mile I had nothing in the tank. 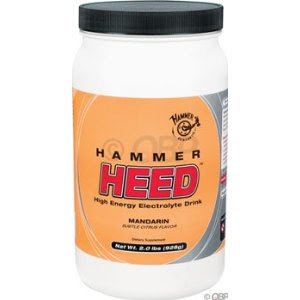 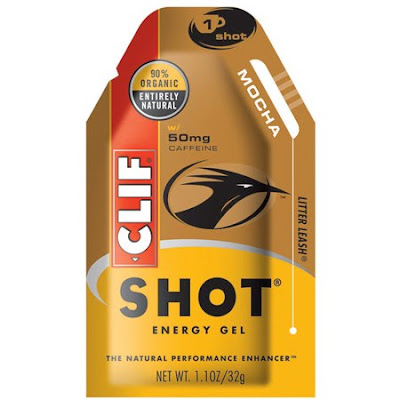 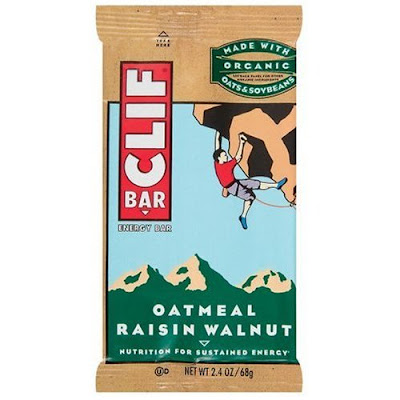 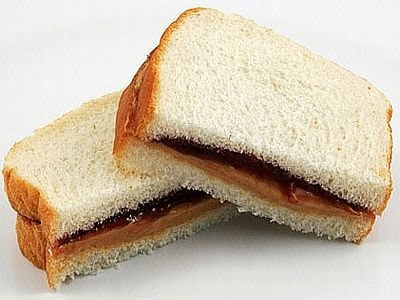 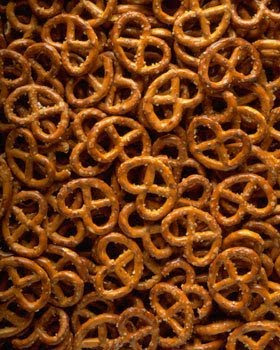